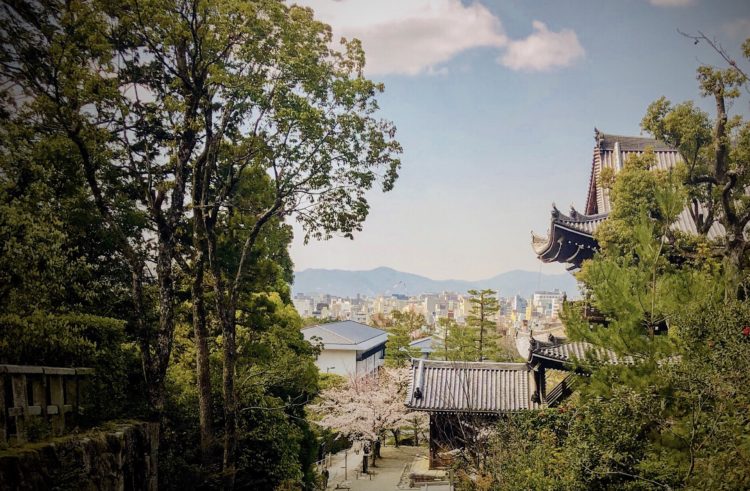 Introducing ourselves to Kyoto took place with a booked bike tour. We went with Urban Adventures.

Our bike tour departed from Kyoto Station with five Aussies and one Kiwi (that’s me).

First we ventured to the Kamo River which also gave us a taste of road and footpath etiquette.

Some points to highlight, are:

The places that we explored were adorable to our newly donned Japan eyes, we were filled with admiration as we got our first taste of temples, shrines and flora in Kyoto.

Our bike tour through Kyoto, included:

If you catch Kamo River walkway when Sakura is in full bloom this would make for a spectacular path. When we were visiting we were about three days off, still a nice view of the river and buildings along the way.

The shrine was built for the 1100th anniversary of the capital’s foundation in Kyoto in 1895 and is dedicated to the spirits of the first and last emperors who reigned from the city. Heian is the former name of Kyoto. We picked our fortune here. Mine started with “The heart of the rose is a treasure that can be enriched with my own” which I found charming as my middle name is Rose.

Cobblestones, bridges, cherry trees and surrounding foliage made this path magical, paths led to temples and shrines and were buzzing with people. A little crowded for biking, I would suggest a nice relaxing stroll more preferable here.

Date’s back to the mid 13th century however buildings were all destroyed during the civil wars of the late Muromachi Period (1333-1573). The oldest of the current buildings was built after that period. Head temple of one of the schools within the Rinzai sect of Japanese Zen Buddhism.

The three gates when you enter represent ignorance, foolishness and hate. As you step over the gate entrances and into the temple, you are to let go of these things.

Once called Gion-sha, this Shinto shrine was founded over 1350 years ago.

This canal went through residential area and featured cobblestone lined walls walls and gorgeous bridges spanning across. Cherry Blossoms and other flora flourished the area. A special spot for a stroll.