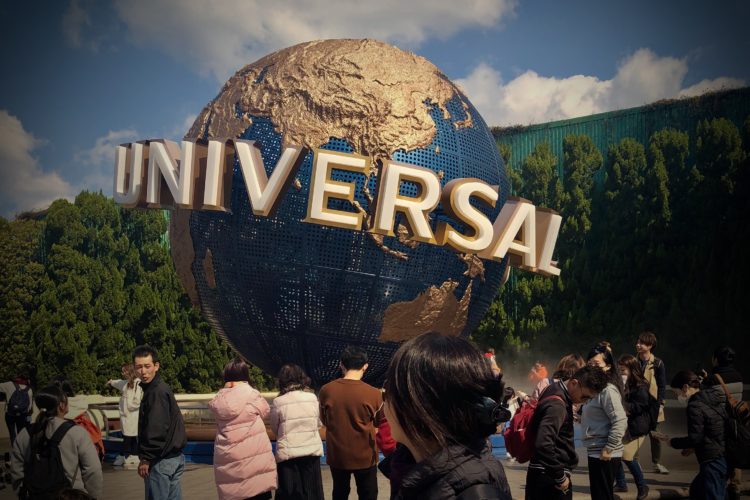 The wow factor for Universal Studios Japan was huge. After a stressful morning of lugging around suitcases and working out Osaka’s train system, we arrived at USJ. We dropped suitcases off at lockers and walked through the entrance with admission tickets pre-purchased from Klook.

We walked in seeing the iconic spinning earth with ‘Universal’ wrapped around it and saw from a distance what was awaiting us. A roller coaster showed off and performed its spins and twirls, hovering against the edges and enticing us to go in.

We were pulled in with huge smiles across our faces and we felt like we would burst with excitement. Our eyes widened in awe, we must have looked like cats ready to pounce.

Once inside an atmosphere of pure entertainment emerged, with people eating and walking (which is most unusual in Japan), most wearing fluffy headbands depicting some Disney character and young girls dressed alike forming sets of twins, triplets and quadruplets throughout the park.

We had purchased an Express 4 pass to save lining up as it would be a busy time of year. First stop was Harry Potter and The Forbidden Journey, we were sped right up past the queue to enter the ride. On our way to the ride we walked through Hogwarts, travelling upstairs and seeing all the portraits moving just like they do in the movie.

The ride itself was an amazing experience that switched between physical senses with fire breathing dragons, flickers of water and smoke. To virtual realities that included us into scenes from the Harry Potter movie.

The next ride Flying Dinosaur was an exhilarating roller coaster that spun us around and had us upside down.

The other two were Spiderman a 4D experience and Backdraft a walk-through set design.

The best part of the park was exploring the unknown and entering pockets of fantasy worlds where the music and environment evolves with it. The park was a whopping 54 hectares.

A must see and do, however, watch out for your wallet, with an express AND admission pass it ends up costing a lot of money.